The 42-story Washington Mutual-Seattle Art Museum in Seattle, Wa, depends on an Alerton Distributed Digital Control (DDC) system. ATS Automation, the controls contractor for the building, chose the Alerton DDC control technology because the project required a control system that would include smoke control.

"The project is unique due to the smoke control aspect," said Pete Segall, ATS Senior Sales Engineer. "Typically, most buildings do not have the DDC system performing smoke control. It is more common for smoke control to be accomplished via the fire alarm system."

Segall explained that the project goal was to satisfy the need to develop a control system that could monitor and control HVAC, Smoke, and Combo (Smoke and HVAC) equipment on both a day-to-day and alarm event basis. "Pure Smoke control systems do not function on a day-to-day basis; however, HVAC and Combo systems do. The smoke and combo systems are able to be manually overridden by a firefighter through a networked firefighter smoke control command panel. This panel allows for the manually override of the smoke control system for floor pressurization and smoke purging."

The following systems are integrated to the Alerton System.

The system needed to comply with the requirements of Underwriters Laboratories (UL) 864 Control Units and Accessories for Fire Alarm Systems. Because the entire control system employs Ethernet, ATS required a switch that would meet the UL's stringent requirements.

ATS chose the EIS Ethernet Interconnect Switch, which is a UL 864 Recognized Component. The UL recognized component mark is rarely seen by the customer, but is often part of a larger end-product that is UL Listed by the fire alarm system supplier. For an end-product to be UL Listed, the product is tested by UL to determine if it meets the requirements established by UL's published Standards of Safety. A UL recognized component has already been evaluated and tested in accordance with UL's component safety standards, streamlining the qualification process for the end-product.

By having the fire alarm system supplier specifying a Contemporary Controls' EIS Ethernet switch to be used within the system, the supplier is not required to perform additional testing on this component. Several fire alarm and security firms have already specified the EIS series as part of their system thereby improving their time-to-market.

Components that bear the UL Recognized Component mark are separately covered under UL's Follow-Up Surveillance program to ensure continued compliance and prevent unpleasant surprises when an end-product is inspected.

Segall said in order to ensure quality and consistency to the public, ATS would rely on Contemporary Controls to offer that same level of consistency. Contemporary Controls was willing to maintain UL 864 Recognition on the Ethernet switches and provide skilled technical support. The EIS8-100T provides 10/100 Mbps ports utilizing RJ-45 connectors. The switches offer wide range AC/DC operation.The switches must meet and maintain certain criteria including dependability which is crucial for the operation of the smoke control network. 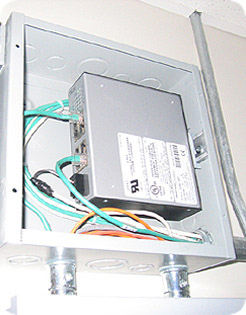 The two Ethernet switches are physically connected to the Alerton BACnet/Ethernet Smoke Control Network via CAT 5 cabling so that precise DDC logic routines could be carried out. The switches were linked together for keeping signal wiring distance within the 225 ft. limitation. One of the switches was used as a "gateway" path to the non-smoke control Global DDC logic boards as well as the Building Management System computer (user-interface to the system). They are positioned in wall-mounted panel enclosures that are also UL Recognized for fire-protective signaling use. One switch is located in the Central Fire Control Room, and the other switch in a Telecom Room on the lower two levels of the Washington Mutual Center.

Segall said the building's system is an entirely BACnet system at the Ethernet and MS/TP levels. It comprises two networks that are a UL 864 BACnet/Ethernet Network and a standard BACnet/Ethernet Network. Alerton global controllers reside on both Ethernet networks. Under the global controllers is the MS/TP network. Wiring for the UL 864 networks had to be kept to less than 225 ft. The non-UL Ethernet networks ran anywhere from 100 ft. to 300 ft.

Segall commented that the use of BACnet in this application is significant. It is an open protocol, it employs standard network technologies such as Ethernet, it is kept current by ASHRAE, it is constantly evolving with technology and there are a large number of third-party systems that can be integrated to BACnet because of the open protocol. "With reference to Ethernet, it is the backbone of the system," he said. "It allows for the high-speed transmission of large amounts of system data."